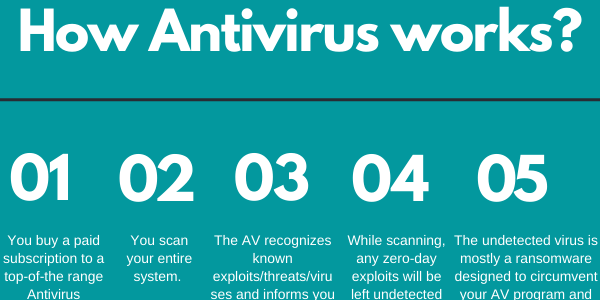 Yes, and no. This is a question with a mixed answer, and an end result that implies on how YOU, the end user, takes important precautionary measures to warrant data safety and privacy. Many antivirus programs claim to detect and even remove ransomware, it isn’t 100% true. Also, once a ransomware takes control of your devices, it’s already too late and there isn’t much that can be done.

Unfortunately, the cold hard truth is:

Many businesses install antivirus program on their network (which is important though) but these programs will NOT protect them from a ransomware attack.

We have more cold hard bitter truths, and what to do in case of ransomware attack here.

Viruses and ransomware are manually programmed and created by hackers. As such, the speed at which they are done by far exceeds the natural viruses such as flu, and common cold. It is hence important to keep your antivirus programs updated regularly.

70% of the businesses that fell victim to ransomware, pinned their hopes on antivirus program.

At the end of the day, prevention is better than cure. While antivirus cannot stop ransomware, at least you can take steps to minimize the chances of getting compromised.

How Does Antivirus Software Work and Why Does it Fail to Block Ransomware?

Why do antiviruses fail in detecting ransomware? To understand this, let’s go back and study how they work! We are explaining it in a step by step process:

Summing it up, AV scans your websites & files and compares them to a database of known viruses. If the code is similar, the Antivirus will inform you to take an action, either by quarantining or deleting the file from your system. That’s pretty much what any antivirus really does.

But hackers are getting really smarter with the passage of time. Many of the top AV do not have newly released trojans, viruses and malware information in their database.

This brings us to the most burning question:

Can an antivirus detect a ransomware?

Yes, but only if it is currently in their database. If not, it is the equivalent of having no antivirus installed on your system and you are on your own. It is the responsibility of developers to continuously upgrade their antivirus programs. In short, there are several months before an AV gets updated with the list of new trojans and malwares, and till that time, your system remains vulnerable.

Many people deliberately choose to ignore warnings from their AV programs and firewalls. And this is one surefire way of how hackers compromise your system.

The increasing hacks of YouTube Channels by Bitcoin scammers

Not a day goes by when we don’t get to read horrible stories on how entire networks were hacked for a ransom! And just recently, YouTube has become a fresh target of these attackers, hacking channels, and holding them hostage until a ransom is paid in bitcoin. And there is no end in sight to all of this!

In 2019, it was estimated that phishing, the most common, popular and successful methods of hackers, cost US businesses a whopping $1.7 billion!

What is the Best Protection Against Ransomware?

Heads up, we have a dedicated post on What to do in Ransomware attack, a complete First Response Guide.

It all starts with the man in the mirror! In short, it starts with you. We understand that human error leads to ransomware, but there are some steps you can take to guarantee data safety.

Always consult with a reliable ransomware data recovery company like BeforeCrypt. Do not talk with the hackers under any way. Let experts like BeforeCrypt handle the work for you.